This was written in collaboration with Sashia Scalvini – see her bio at the end of the post.

The Medici family had an incredible amount of influence on the history of Florence.  The family of bankers was the most powerful family of the Italian Renaissance and brought artistic, cultural, and financial wealth to Renaissance Florence.

The family members became popes, French queens, and rulers, and commissioned some of the most well-known Renaissance art by some of the most famous artists of all time, including Tuscan-born artists like Michelangelo, Donatello, Botticelli, and Brunelleschi.

We can still see the Medici family’s legacy in buildings, museums, and artworks scattered throughout Florence and its surroundings.   The sites are perfect for visits in any season, even during the winter!

Let’s take a quick look at where you can see the Medici in Florence today.

Map Of Where To See The Medici In Florence

This was the first Medici palace in Florence, and home of Cosimo the Elder and Lorenzo the Magnificent (a.k.a. Lorenzo il Magnifico).  Michelangelo also lived here as a young adult.

Most Important Artwork:  The private chapel, known as the Magi (Wise Men) Chapel.  Its walls are entirely covered by a fresco cycle showing the Journey of the Magi (Wise Men).  This procession is incredible and holds portraits of some of the members of the Medici family.

Don’t Miss:  The Florentine Hall of Mirrors which was built when the Riccardi family lived in the palace.

For opening days and hours, see the official website of the Palazzo Medici Riccardi.

Cosimo the Elder had his own cell in this Dominican convent.

Don’t Miss:  The rooms of Girolamo Savonarola, the Dominican friar who was called to Florence and was very active in the Renaissance. Savonarola is known for having burned objects considered occasions of sin, including some books and secular works of art. He called these burnings the ‘Bonfire of the Vanities.‘   He became an enemy of the House of Medici and helped bring about their downfall in 1494.

For opening days and hours, see the official website of the San Marco Museum.

The San Lorenzo Church was financed by the Medicis, and they commissioned the leading Renaissance architect Filippo Brunelleschi to design it.

Don’t Miss:  The two pulpits by Donatello (his last works) and the Medici library designed by Michelangelo.

For opening days and hours, see the official website of the San Lorenzo Church.

Star of The Show:  Inside the Medici Chapels (Cappelle Medicee) you’ll find the amazing Cappella dei Principi (Chapel of the Princes) which holds the tombs of the Medici Grand Dukes.  Each is made with different colored marbles and semi-precious stones.

The Medici family established the Grand Ducal Hardstone Workshop to build the Cappella dei Principi, and the workshop still exists to this day.

Another Must-See:  The New Sacristy – Michelangelo was both the architect and the sculptor. There are no less than seven statues by him.  Lorenzo the Magnificent is buried in a simple tomb here.

New in 2022:  The ‘Secret Room of Michelangelo’ will open in 2022.  This room was discovered in 1975 and has never been seen by the public.  It will exhibit rarely seen wall drawings by Michelangelo.

For opening days and hours, see the official website of the Medici Chapels.

The Palazzo Vecchio, or the ‘Old Palace,’ is the old government building that became the home of Cosimo I and his Spanish wife Eleonora.

Inside you’ll see Eleonora’s private chapel, statues by Donatello and Michelangelo and the famous ‘studiolo.’

Don’t Miss:  The Hall of the Five Hundred where Michelangelo and Leonardo da Vinci were each commissioned to paint a wall.  Even though the Hall holds no paintings by the two great Renaissance artists (Michelangelo didn’t paint his and Giorgio Vasari painted over Leonardo’s painting), it’s emotional to be in the Hall and think about the two greats once standing in front of each other and trying to figure out how his painting could be the best.

For opening days and hours, see the official website of the Palazzo Vecchio.

Originally built as an Office building (Uffizi means ‘Offices’ in Italian) for Cosimo I de’ Medici, the Uffizi Gallery is one of the absolute finest collections of paintings in the world. The museum still holds many paintings from the Medici family’s collection.   You’ll also find many portraits of the Medicis, and an amazing room built to house the most important part of their collection.

Six generations of the Medici family lived in the immense Palazzo Pitti which today holds four museums and the Boboli Gardens.

The Palatina Gallery and the Royal Apartments

Inside is an impressive collection of paintings, including the largest concentration of paintings by Raphael in the world.  You’ll also find works by Titian, Caravaggio, and Rubens.

This museum is located in the summer apartments of the Pitti Palace and houses semi-precious stone vases, rock crystals, and ivories.

Don’t Miss:  The jewelry collection, the incredible flask in pure lapis lazuli of exceptional quality, and the death mask of Lorenzo the Magnificent.

This is an underseen museum with the most amazing collection of paintings by the Macchaioli Art Movement.

Macchia-what?  The Movement was composed of a group of Italian painters active in Tuscany in the second half of 1800s who created their paintings outdoors to capture natural light, shade, and color.  This practice ties them to the French Impressionists.

The Macchiaioli group did not follow Monet’s practice of finishing large paintings entirely en plain air, but rather used small sketches painted outside and then finished the works in the studio.

The Costume and Fashion Museum

Enter the first state museum in Italy dedicated to the history of fashion.  The collection includes clothing, jewelry, and accessories from the 18th century to the present day.

For opening days and hours, see the official website of the Pitti Palace.

Cosimo de Medici’s wife desired this enormous garden, which is one of the most beautiful examples of the Italian garden style.  It became a model for many European courts.

Don’t Miss:  The spectacular grottos, especially the one with replicas of Michelangelo’s ‘Prisoners’ (the originals are in Florence’s Accademia Gallery).

For opening days and hours, see the official website of the Boboli Gardens.

The below villas (along with the Boboli Gardens) are part of Tuscany’s UNESCO World-Heritage Site of The Medici Villas & Gardens in Tuscany.

These two villas are located in the northern outskirts of Florence (in the Castello area), and are situated within walking distance of each other.

You can visit both the garden and the inside of Villa Petraia.  At Villa Castello, you can only visit the garden, but it’s very interesting and has a fine example of a grotto.

How To Arrive:  The easiest way is to take a 15-minute taxi from the center of Florence.  Or, take the train and get off at the Florence-Castello station and walk about 1.5 kilometers to Villa Castello (and another kilometer to Villa Petraia).  You can also take the bus from the center.

This was the preferred villa of Lorenzo the Magnificent and his sons.

The Villa contains the apartments of Grand Duchess Bianca Cappello, a noblewoman who had a relationship with one of the Medici – the Grand Duke Francesco I.  The Grand Duke and Ms. Cappello both ended their lives here in strange circumstances.

Don’t Miss:  The second-floor museum ‘The Still Life Museum’ with about 200 paintings belonging to the Medici collection.

For opening days and hours, see the official website of Villa Medici Poggio a Caiano.

A Medici murder took place at this villa in the tiny Tuscan village of Cerreto Guidi.  Isabella de’ Medici was the daughter of Cosimo and a beautiful young girl.  Her jealous husband had her murdered.

Nearby Attraction:  Cerreto Guidi is close to the town of Vinci, so don’t miss a visit to Leonardo da Vinci’s birthplace.

For opening days and hours, see the official website of Villa Cerreto Guidi.

Hopefully, while you’re in Tuscany you’ll have a chance to see one or more of these creations of the Medici dynasty!

Check out Florence’s delicious Gelateria de’ Medici, one of the Best Gelaterie in Florence!

Who were the Medici popes?

Which members of the Medici family became queens of France?

Are there still Medici in Florence?

While the Medici bloodline ceased to exist in the 1700s, you can still find the legacy of the Medici throughout Florence in its art and architecture.

Author Bio – Sashia Scalvini
Sashia, born in Denmark, first came to Florence in 1993 to study the Italian language and Renaissance art.  The original plan was to stay a few months, but it turned out to be a life project – she also found her husband Carlo (who cooks the most delicious Tuscan dishes). Sashia has an MA in Italian language, literature, and art.  She has worked as a teacher and has been an official tour guide in Florence since 2008. Her fields of research are within the Italian Renaissance and she has a special love for Michelangelo. When not working or studying or visiting churches and museums, she loves opera, cinema, food and wine. You can email her at onsiteflorence [@] yahoo.com and she’ll set up the best tour for you and your family! 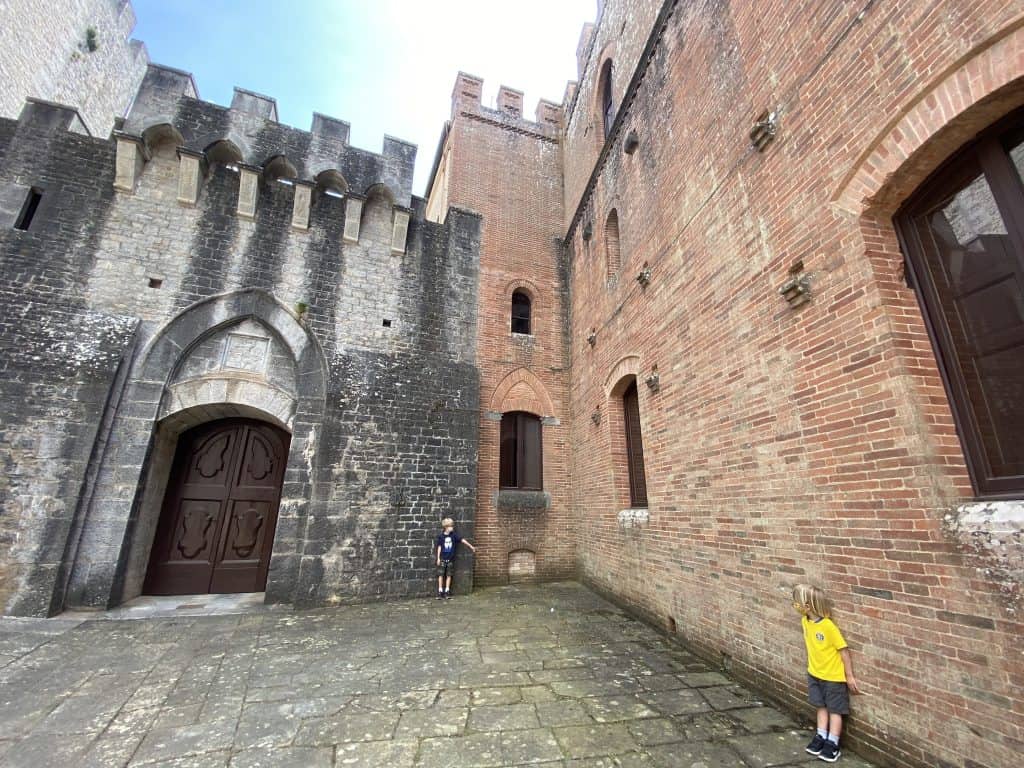